The Autumn Deer Rut: One of Nature’s great spectacles to observe, but If you care for DEER – and yourself- please dont get too NEAR!

As the leaves begin to change colour its time again for the ever-fascinating spectacle of the deer rut, which brings alive many of our woods and parks with the sound of clashing antlers and loud roars of red deer stags, belch-like groans of fallow bucks, and eerie whistling of sika stags. The season for the red deer rut, sika and fallow deer rut may stretch out over eight weeks, but for all three species it reaches its peak – with greatest numbers of females in oestrus – at some time during October. Having lived placidly together in all-male bachelor groups over the summer, by end of September the mature males develop thickened necks and manes, and become increasingly aggressive, sparring with one another to decide their initial rank in the hierarchy. The stags then set off in search of female groups and mating grounds, some travelling several miles commonly back near to where they rutted in the previous year.

The deer rut is o

ne of nature’s great annual spectacles, as well-matched males are seen locking antlers in fierce battles for supremacy and access to females, which not uncommonly will lead to injuries and sometimes even death for the loser. Such head to head battles are preceded by a wide range of ritualistic displays including thrashing of vegetation, wallowing in mud, and parallel walking to suss out the opposition. Parallel walks can often be a sign that a full-blown fight may be imminent, unless one of the stags thinks better of it first and scarpers to leave the resident stag in charge a little longer.

Once the largest males have gathered a harem of females or set up a rutting territory, at the peak of the rut they will be active almost constantly throughout the day and night for a week or more, chasing away any other males that come too close. By regular roaring a stag will aim to attract females and signal to other stags that he remains strong. Other displays involve thrashing their antlers and covering them in vegetation, chivvying females to keep them together in one group, and of course courtship behaviours and mating. During the rut the master stags (called bucks in case of fallow deer) will take in hardly any food and many will lose as much as 25% of their body weight over just two or three weeks.

While red deer stags will generally aim to collect and defend a harem rather a set piece of ground or ‘rutting stand’ (more commonly associated with fallow deer), our own research on mating systems for fallow deer has shown great variability in the mating system adopted: ranging from following females, harems, dominance groups with several males, stands, temporary stands, multiple stands, and even true leks of several tiny abutting territories each held by a different buck.

The autumn deer rut has become a popular event drawing large numbers of wildlife enthusiasts to the many deer parks, forest and moors across the country. One downside of this is that rutting deer, not least in enclosed deer parks, often become surrounded by people on all sides, as folk approach ever closer in inappropriate and often dangerous attempts to get close-up photos using short lenses or smart phones.

Close approach by people will frequently disrupt the mating system, as female deer start to feel unsafe on their chosen mating area and other males move in while the master stag has to work even harder than normal to re-establish his territory or harem repeatedly. Testosterone fuelled stags often lose their fear of people during the rut, and once cornered or surrounded may suddenly charge at any bystander who has foolishly come too close, with some serious incidents in most years.  In fact just two days after I filmed the clip above showing people with smart phones surrounding a group of rutting deer in Richmond Park, in the same park a woman gored by a stag was hospitalized for several days.

If going to observe and photograph the deer rut this year, do try and arm yourself with binoculars or a camera with a long zoom. In deer parks like Richmond and Bushy Park on the edge of London, signs are now posted in many areas asking people always to keep at very least 50 metres between you and the deer, ideally more! In case of wild deer 3x that distance is better and ensuring at all times that the deer do not become encircled by people approaching from several sides at once. You’ll be rewarded by getting views of deer behaving much more naturally.

The photo below shows a good example of an area set aside by the National Trust on Exmoor near a favoured rutting area, where posters displayed during the rut ask people to remain on one side along the field boundary; – if adhered to, this gives the deer the chance to just gradually move a little further away if and when disturbance gets excessive. 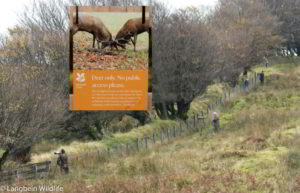 Enjoy the spectacle – but take care !