Despite our ever-increasing human population, expanding road networks and urban sprawl, deer have adapted to living within major cities including the like of Sheffield, Edinburgh, and Southampton. Even more surprising is the number of deer that now inhabit London Boroughs inside the M25 orbital motorway- one of Europe’s busiest roads. How they manage to 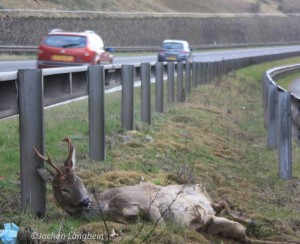 avoid the dangers of often eight-lane wide carriageways is an intriguing question. The sad fact is that vast numbers of deer die attempting to cross Britain’s roads leading approximately to 70,000 deer casualties, many hundreds of human injuries and several fatal traffic collisions every year.  On just the M25 alone these annual figures include 65 deer road kills, however from our emerging research we now know that many more do manage to cross safely by using low underpasses and bridges. First evidence of this I captured on video using CCTV ten years ago, of one fallow buck crossing a narrow concrete M25 bridge. Some years later I managed to film also larger groups of deer crossing a wider bridge, but just one using a small underpass (see Youtube playlist below).

In attempt to record these novel behaviours in greater photographic quality and thus help demonstrate the value of such structures for both animal and road safety, I recently teamed up with wildlife photographer Jamie Hall – to make use of his innovative camera trap expertise – with quite astonishing results.

Jamie staked out some of the bridges I’d previously observed over several nights, producing stunning images that capture the calm nature in which deer cross a motorway bridge overlooking the busy night-time traffic. Amazingly, Jamie has now also been able to film deer passing through a number of long M25 underpasses, of which some preliminary photos and videos are being shown on these blog pages for the first time. Recent research with other colleagues has shown that fallow, red and roe deer do regularly use the small and mostly short underpasses (up to 35m in length) beneath local roads in the New Forest (Muttock, Langbein & Diaz, in prep).  The even more surprising aspect shown so clearly here for the first time in Jamie’s images, is that fallow will regularly use much longer underpasses, including some less than 3 m high and over 100 meters long. Furthermore, the footage illustrates that deer will cross these low dark structures even when they are partially flooded.

In previous research (Existing Structure study)  with The Deer Initiative I’d explored the potential suitability for use by deer of numerous bridges, underpasses and culverts over and under trunk roads in Devon and Cornwall. The findings highlighted that a high proportion of existing structures of quite modest size are likely to be adopted as safer crossings by deer, given limited modifications such as short lead-in deer fencing or even merely removal of various obstacles to their direct access.   High deer fencing remains one of the few well proven methods of reducing deer collisions on motorways and major trunk roads, but even this tends to be most successful where it channels animals to safer crossing points. Wide “green bridges” or landscape bridges constructed in parts of Europe and the US primarily to reduce habitat fragmentation can help also to reduce animal collisions, but their high cost tends to rule them out from widespread use for deer-vehicle collision mitigation. To some extent the recent focus on high profile green bridge projects has led to a widespread misconception that much smaller or joint use structures, such as culverts, footpath and farm accommodation structures even when carrying low levels of road traffic, have limited potential as safer crossings for deer and other large wildlife species.  As the images on these pages show so very clearly, deer are however are becoming increasingly accustomed to living close to traffic and urban areas, and do use many structures of modest size not specifically constructed for wildlife.

We now hope to raise sufficient funds to allow us to extend this work to study and film deer at several other motorways and trunk roads (using both trail-cams to record detailed wildlife movement activity patterns, as well as recording higher quality footage to help demonstrate the usefulness of wildlife passages to a wider public). This will help us determine the most successful structure types and local conditions to facilitate use by deer, and which type of existing structures under and over trunk roads have greatest potential to be adapted to maximise their usefulness for prevention of animal collisions.