When researching and filming red deer in the urban fringe over the past two years (see my previous blog) one particular stag always stood out for his intelligence, dexterity and constant twinkle in his eye ! In one video clip featured widely on BBC TV and other media during March, I’d filmed him dislodging bird feeders in gardens on the edge of the Exmoor National Park in Somerset. 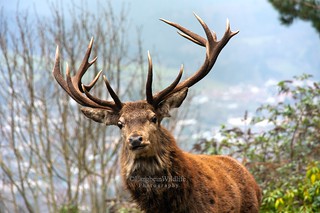 The intriguing thing about this however is not merely to have a stag in a garden pinching food from a bird feeder, but the very intricate way this stag gradually ‘learned’  to use his antlers to unhook the feeders.  Not least as hoofed animals (ungulates) are not generally regarded as the brainiest among mammals. I’d observed a number of other stags in the past simply thrashing their antlers against bird feeders, scattering a few seeds on the ground now and again.  But in the amusing trimmed version of my clip with audio as used by the BBC Instagram  it shows this old wily stag actually using the tip of his antlers to lift feeders off the tree branches they were hooked on to.  In the first part of the clearer full size youtube clip (below) you can see the feeder being  seen to smash open on the deer’s back, though this was far from a one off.

Having set up cameras by several bird feeders in nearby gardens. the wily old stag i named ‘Cedar’ managed the trick increasingly quickly; but normally once dislodged then he would paw at the feeder on the ground until the lid snapped off and then ate the contents. 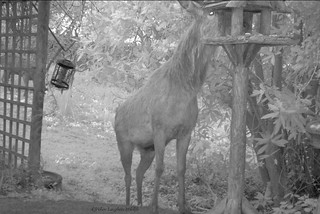 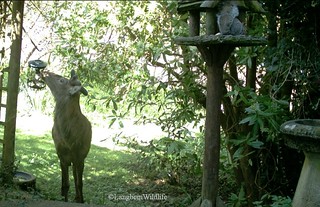 One of the first occasions I noted him and another stag feeding from bird feeders was two year’s earlier in spring, soon after the stags had cast their previous antlers to start to re-grow a new set (see antler growth blog). Even then ‘Cedar’, aged at least 12 to 15 years old at the time, showed he was much more adept than the other deer. Above he is seen reaching with his tongue right into a bird table, while the others just waited for the occasional tit-bit to fall on the ground.  Sadly due to an infected injury sustained in the rut this stag did not make it through yet another winter, though he’d lived far longer than most wild stags ever reach on Exmoor.  It will be interesting to see if some of his many offspring turn out to be just as clever.

To see some of the other antics this wild stag got up to when visiting various gardens I’d been filming in, click on the thumbnails below to link to short video clips, ranging from some where he uses his antlers as backscratchers, to others where he raids the washing line to dress up for Halloween :-). Click on thumbnails below to play clips.